‘Tis the season to bake all the sweets. Cookies, cakes, pies, traditional festive breads like oliebollen and panettone …you name it! Like everywhere else in the world, a big holiday like Christmas obviously comes with special treats. In Greece, the food on the table varies from region to region, but a few recipes are considered a must all over the country.

Two of them and most popular of all, are the two Christmas cookies Melomakarona and Kourabiedes, which seem to divide the population into two camps. While most people enjoy both, everyone who grew up in Greek culture passionately favors one of the two. 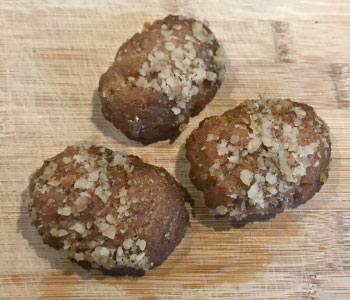 Melomakarona are soft and syrupy, topped with walnuts and warmly flavored with spices like cinnamon and cloves, but their most important ingredient is honey.

They are so rich in flavor as they are in history. Their name derives from the ancient Greek word “makaria”, which was the pie for the soul. That is, a piece of bread, in the shape of the modern melomakarona, which was offered after the funeral. The first historical documents where we meet “makaria” date back in 430BC when they were served after the famous Epitaph speech of Pericles in Kerameikos area in Athens. The “Makaria” were later soaked with honey  and were named: honey (“meli” in greek) + makaria  = melomakarona, according to the Byzantines.

Typical ingredients of the melomakarona are semolina, orange zest and juice, cinnamon, some aged cognac and olive oil. Immediately after baking, they are immersed for a few seconds in cold honey syrup. Finally, they are decorated with ground, as well as bigger pieces of walnut. 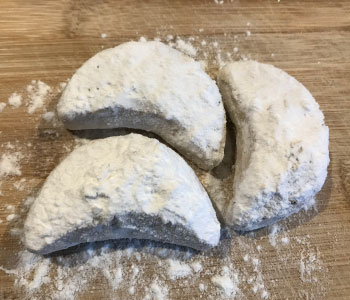 The word “kourabiedes” derives most probably from the Persian “gulabiya”, a cookie made with rosewater since the 7th century in Persia. The Greeks seem to have adopted them in their cuisine during Byzantine period, around the 10th century, through the Arabs and their shortbread-like biscuit “qurabiya”. A similar cookie has appeared in Ottoman cuisine since the 15th century, under the name kurabiye.

Kourabiedes are usually shaped either into circles or crescents, then baked till slightly golden. Immediately after removing the cookies from the oven, the Kourabiedes are rolled in icing sugar and left to cool. The most common flavoring is vanilla, but other variants include rosewater, Greek cognac, or mastika.

To make up your mind about which is your favorite, we recommend sampling both as many times as you get a chance!

This website uses cookies to improve your experience while you navigate through the website. Out of these, the cookies that are categorized as necessary are stored on your browser as they are essential for the working of basic functionalities of the website. We also use third-party cookies that help us analyze and understand how you use this website. These cookies will be stored in your browser only with your consent. You also have the option to opt-out of these cookies. But opting out of some of these cookies may affect your browsing experience.
Necessary Always Enabled
Necessary cookies are absolutely essential for the website to function properly. This category only includes cookies that ensures basic functionalities and security features of the website. These cookies do not store any personal information.
Non-necessary
Any cookies that may not be particularly necessary for the website to function and is used specifically to collect user personal data via analytics, ads, other embedded contents are termed as non-necessary cookies. It is mandatory to procure user consent prior to running these cookies on your website.
SAVE & ACCEPT